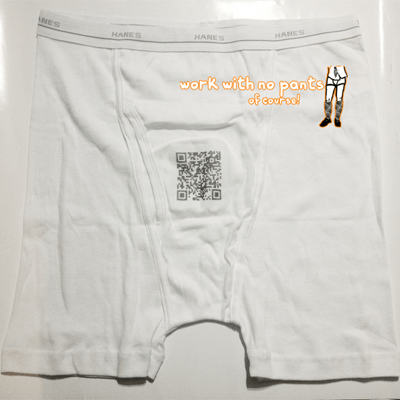 Work With No Pants

A befuddled loser starts a corporation where employees like himself will be accepted with arms wide open: both those who wear and do not wear pants.

After the tragic death of his parents, Jud Cohen decides to do some good in the world and formulate his own company: a company that would embrace employees like himself: workers who were often late, show up drunk, take toke breaks, and forget to wear pants. Throughout the game, players (poised as Work With No Pants employees) hunted for clues, performed a series of absurd work related tasks, and solved the mystery behind Jud Cohen’s parents’ death.

Work with No Pants was a grassroots Alternate Reality Game produced by Queen Spade Creative that played from June to September of 2012. According to ARGNet, Work with No Pants “embraced the absurdist aesthetic to great effect.”

Over the course of the Alternate Reality Game, players who signed up as International Representatives of Work With No Pants competed to earn their wages (which may or may not have monetary value as the fine print revealed) by completing a series of creative tasks: products to be featured in the company “store.” The tasks included:

For a project walk through, please visit the guide created and posted on Wonder Weasels.